We can no longer count the number of VPNs available on the market, and it is far from over: Google has indeed added its name to the long list of services allowing surfing in complete anonymity.

Google has announced the provision of a VPN service for all subscribers to the 2TB plan of Google One. For the moment, this novelty is reserved for American users of Android smartphones. Eventually, the offer will also be available on iOS, Windows and macOS as well as in other countries.

Only for Google One subscribers

Google One is a set of services whose main advantage is additional online storage compared to a free Google account (15 GB). The 2TB offer, billed at $9.99, also includes access to Google experts for after-sales service issues, Pro sessions, Google Store rewards (in a handful of countries, unfortunately not in France) and other benefits . VPN can also be activated at no additional cost on devices of family members logged into the same account (up to 5 additional people). 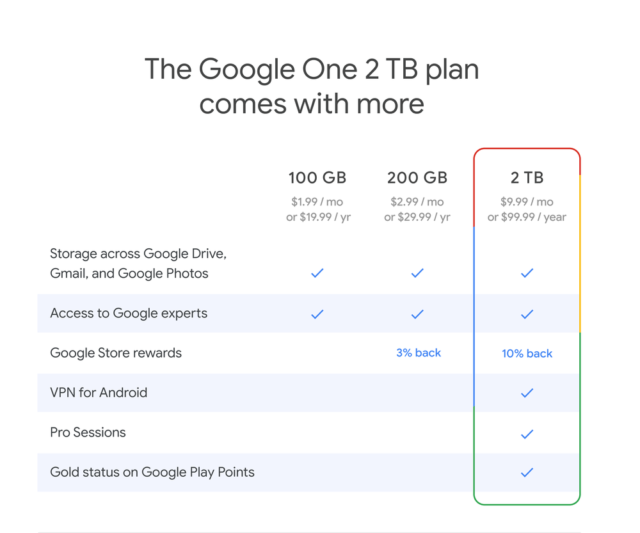 It is therefore not a free VPN, but remember that free VPNs are not really free: the data passing through the servers of a VPN provider can be used for display advertising, or even for even more malicious operations. Google’s offer has the advantage of relying on the infrastructure of the search engine which, let us remember, earns money with targeted advertising. This is not the first time that Google has launched into VPN: the group had already attempted this adventure with subscribers to its Google Fi telephone service, available only in the United States. Pro sessions, another new feature launched by Google, allow you to chat with a specialist to get the most out of the company’s devices. These virtual meetings will be launched in the coming weeks in the United States, Canada and the United Kingdom.