Experimenting with Doom has moved from running on exotic devices like electronic pregnancy tests, to a combination with unusual power sources. In particular, the game was launched on a calculator powered by potato-based electrochemical cells. Doom took 750 potatoes and the same amount of copper coins and galvanized nails to launch. But it works! 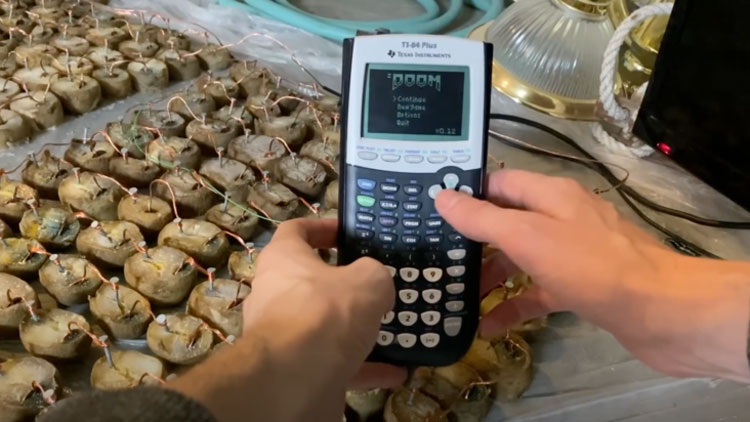 Still from the video below

Note that the idea of ​​launching electronics powered by potatoes appeared as a joke in 1999. A note about such a power supply for the server was posted on the The Register website. The news with reference to the pranksters was published by many publications, including the BBC. Then, however, the articles had to be deleted when the source confessed to the joke.

And yet, every joke, as you know, has something interesting. Five years after the “incident”, the server powered by potatoes was assembled in Russia, which, if memory serves us, was written in the January 2006 issue of “PL Computer”. After all, the whole question was how many potatoes do you need for an electronic device to work from such a power source?

One of these days an enthusiast from the USA on his channel Equalo posted a video on YouTube in which he talked about running Doom on a graphing calculator with battery powered potato. Potatoes are low in acid to create a powerful galvanic power supply, so 750 potatoes or parts of them were used to power a 4.5V 90mA calculator battery.

The original plan was to run Doom on a Raspberry Pi Zero platform with output to a TV panel. But while the battery was being assembled, some of the potatoes began to deteriorate and, as a result, instead of a stable current of up to 120 mA, a source with a much lower rated current turned out. The battery collected from potatoes was enough to run Doom on the Ti-84 Graphing Calculator, which consumed up to 30 mA. On this, you must understand, experiments with the launch of Doom will not end.