If you’ve ever found a small case with wireless headphones on the go, you’ll probably also agree that you’d prefer to keep them close to your phone under supervision and at hand at the same time. This is what the new super-resistant Ulefone Armor 15 is proud of. It is the very first super-resistant phone in the world, from the inside of which you can pull out completely wireless headphones! 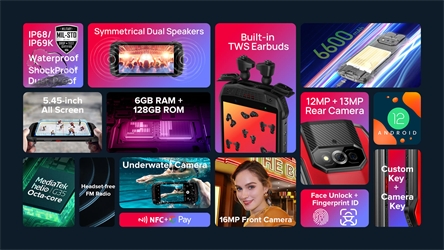 Specifications Ulefone Armor 15. A rather unexpected addition is the built-in completely wireless headphones

But back to the phone, which once again attracts maximum resistance given the IP68, IP69K and MIL-STD810G standards. On the front, there is a relatively small 5.45″ HD+ display, which is complemented by prominent front 2W stereo speakers. In the frame above the display, there is a notification diode and a 16 Mpx selfie, you can also look forward to a fingerprint reader or a side key whose behavior you can adjust it in the phone settings. You can use the camera trigger for shooting videos underwater, where the display will not register touches.

On the distinctive red back, we can notice two carbon parts, one of which is followed by a dual camera (12 Mpx main sensor and 13 Mpx macro) with illumination. The battery itself has a capacity of 6,600 mAh, which is a bit of a “weakness” for Ulefone. The headphones thus take up quite a lot of space in the phone.

Computing power is provided by the Mediatek Helio G35 with 6GB of operating memory and 128GB of storage. You can start the FM radio even without connected headphones, thanks to NFC support you can count on Google Pay mobile payments. Inside the phone, count on Android 12. Ulefone Armor 1 price 5 is not yet known, but the phone should soon appear on Kickstarter

. And that will be its primary sales channel.