From time to time on Mobilmania we delve from phones to smart home devices. The new smart video doorbell Evolveo Ringo DB2 is a handy gadget for those who want to monitor access to their apartment or house. It is controlled via mobile. The bell is sold here at the price of 2,090 CZK.

The bell, of course, consists of two parts. One outdoor, which you place next to the door and offers both the doorbell button itself, but also a camera. You then plug the other one, which contains the ringing mechanism of the doorbell itself, directly into a socket in the interior of the property, it is connected to the outside part wirelessly. 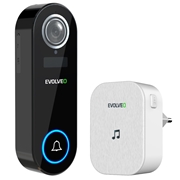 The device must then be connected as well to the home Wi-Fi network, where it can access the Internet. You can then easily pair the doorbell with your smartphone and manage or control it directly from the app. It is even possible to carry out two-way communication with a person (voice and video) at the door from anywhere.

The camera inside part of the doorbell even allows you to transmit a live image via Wi-Fi, where you will appreciate the wide angle of view 130°, while there is no infrared light. The doorbell also has automatic motion detection and an alarm siren can be activated on it to deter potential thieves. In addition, the doorbell can record the recording from the camera on the inserted microSD card, so then thanks to the saved recording it also replaces the security camera. The recording can also be saved to cloud storage.

The outdoor part (as opposed to the interior part, which is plugged in all the time) is powered by a pair of alkaline batteries, which the manufacturer promises will last up to half year. At the same time, you can easily find out the battery status in the application on your mobile phone. An additional bonus is the IP65 water resistance, which makes it resistant to rain, and the support for the Google Assistant and Amazon Alexa voice assistants is also an advantage.

There are several video doorbells on the market today , for example from the Netatmo brand: