Some mobile brands, especially those from Asia, use their mascot for various marketing purposes. Some have had it for a long time, others have only recently acquired it. It is usually a nice figurine or character that is liked by children and adults at least laugh at its portrayal – that is, mostly.

For example, the mascot of the company Xiaomi is a bit curious for the Western world – the cute bunny Mitu, who because of the five-pointed star on his battering ram (and also because of the ruling regime in the country he comes from), no one will say anything other than “communist hare”. Not so cute, rather futuristic thanks to the glasses, but at least unencumbered by any ideology, is the Realme company cat called Realmeow.

After many years of going without a mascot, even the South Korean Samsung thought that it would exploited. The choice fell on a rascally-looking blue alien whose clones we could first see last year in an advertisement for the Galaxy Studio service for a choice of colored covers for the Galaxy Z Flip3. But the premium service was not intended for the Czech market, so most of us did not register the spot at all:

The alien from the video got a slightly friendlier face and also his name. It sounds 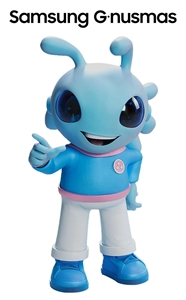 , which is an anagram – specifically the Samsung name read backwards (with a hyphen added).

Against Alzák, who is such a Czech “alien from next door”, G-nusmas is polished, as if came out of the studio from Disney. Will it work?

Unfortunately, global marketing is a tricky thing, so the headquarters in Seoul must have no idea that there is already one in the small Czech electronics market we’ve had an alien for a long time – pretty annoying and persistent, by the way. He’s been yelling at us with commercials for almost 15 years and he’ll happily sell us a phone or a Samsung washing machine, or anything else. Only instead of two antennas it has one and it is not blue, but green.

Alsace can remain calm. His position among aliens in the Czech Republic is practically unshakable

Alzák, shake, G-nusmas is coming! If he’s going to be yelled at, at least not in Korean. But even if he spoke Czech, two aliens on the same planet – it won’t do any good and probably won’t even work…