Mediatek dominates the middle class of mobile chipsets, but it was also the first to get a 4nm processor for mobile phones. Dimensity 9000 was subsequently compared with the top Snapdragon 8 Gen 1 , which already has its overclocked “Plus” version . And we didn’t have to wait too long for a response from Mediathek.

And while with the top Snapdragon we can attribute the higher computing power of the chipset to the more efficient production process (the shift from Samsung to TSMC is really very significant), Dimensity 9000 + remains with the same production technology and the same arrangement and combination of processor cores. Only the Cortex-X2 supernucleus was overclocked from 3.05 to 3.2 GHz, otherwise the cores remain the same. Processor performance has increased by five percent. 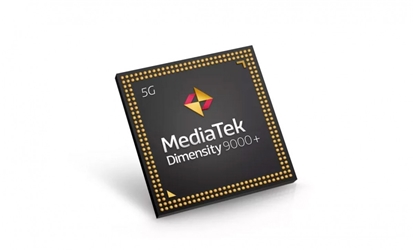 The most powerful chipset from Mediatek is Dimensity 9000 +

Up to ten percent will increase the performance of the graphics adapter, which is the Mali-G710 MC10. The chipset also includes a new Imagiq 790 image coprocessor, which allows simultaneous recording of 18-bit HDR video from three cameras at once. The maximum resolution of one captured photo can be up to 320 megapixels, the processing power is 9 gigapixels per second. Noise reduction will take care of noise reduction when shooting 4K HDR videos.

The chipset also includes a faster 5G modem, which connects to Wi-Fi 6E and Bluetooth 5.3. The chipset can handle up to 144Hz displays with WQHD + resolution (2,960 × 1,440 pixels), or with up to 180Hz displays that have Full HD + resolution. In many parameters, the chipset from Mediatek exceeds the limits of current smartphones. The first Dimension 9000+ phones will hit the market in the third quarter of this year.

5G stands for Fifth Generation Wireless Networks. They have shorter response, higher baud rates, capacity and variability. Developed to handle the broadband connectivity of millions of people and machines in metropolitan areas, energy-efficient sensors that last for years with a single battery, and anything in between

The world has launched a mass launch of 5G networks in 2019, the start of 5G in the Czech Republic was delayed. The most important developers of 5G technologies and manufacturers of network components are Huawei , Nokia , Ericsson and Samsung .