Watch Apple Watch offers a lot of features that have made them literally a separate device in recent years. You can call from them, listen to music, control a smart home, and quite recently a web browser has been added. You can even play videos on your watch, although it’s very unintuitive, and even worse with the content itself. And a rather unexpected function has been added … 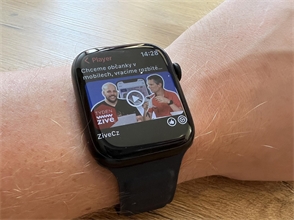 You can now watch YouTube videos on your Apple Watch. The question is how many users will actually use it.

But that is changing now as you watch YouTube videos on your watch. You can help with a new app from the App Store called WatchTube , which is basically an alternative YouTube player adapted for Apple Watch. Out of sheer curiosity, we tried the app right away, and we can confirm that really works!

We tried to play Live Week from YouTube on the watch:

But that all positives end . Although, the creators managed to adapt the content perfectly even for a small watch display, it certainly cannot be said that it would be somehow convenient. However, we praise the use of the crown to rewind the footage of the video. The bigger problem, however, is that the watch takes a lot of time to initially load long videos, which can take tens of seconds to several units of minutes. In addition, the search itself is slower.

But if you hold on, the content will actually load, the video will it starts and, surprisingly, doesn’t cut at all. You can then listen to it via the connected headphones or via the integrated speaker. Of course, the screen size is limiting, which is why you probably won’t last long for a video. Yet it is more than an impressive “emergency” and, above all, a demonstration that it is.

For all those who do not need to try similar experiments then of course there is an official watch YouTube Music app for listening to audio.