One of the first Huawei products running on the newly introduced universal HarmonyOS platform is the Huawei Watch 3 smart watch. Comes in a basic 46mm version and an improved (and also slightly larger) 48mm Pro version with premium materials and extended life. Availability has so far been announced only for the Chinese market, where they will start selling in the coming days.

Although Huawei has a relatively large number of watch models, the really smart ones, supporting the installation of third-party applications, were last released four years ago. In 2017, it was the Huawei Watch 2 on the Android Wear platform. Therefore, the number “3” follows in the marking as a logical successor. In this context, the currently sold watches of the Watch GT series are considered rather a smart sport tester, although even to a limited extent applications can be installed in them.

The watch again relies on the proven circular shape of the dial . The body is made of stainless steel, the Pro version is a combination of titanium and ceramic. They have a resistance of 5 ATM. The circular AMOLED touch screen has a diagonal of 1.43 inches and a converted resolution of 466 × 466 pixels. For versions, the display is covered with sapphire crystal. The watch contains 2 GB of RAM and 16 GB of internal storage.

Independent of a mobile phone

In terms of connectivity, there is no lack of Wi-Fi, LTE connectivity via eSIM, NFC, Bluetooth 5.2 and GPS / Galileo. The watch is charged wirelessly and its durability depends a lot on the way it is used. In a typical Huawei tent scenario, the average endurance value is 3 to 4 days for the basic version and 5 to 7 days for the Pro version.

The watch runs on the HarmonyOS system, it is controlled by a rotating and pressable crown to scroll through and select items, as well as one separate button. The built-in speaker, microphone and integrated eSIM with a cloned phone number allow you to handle calls independently of the paired mobile phone. However, this feature depends on operator support. 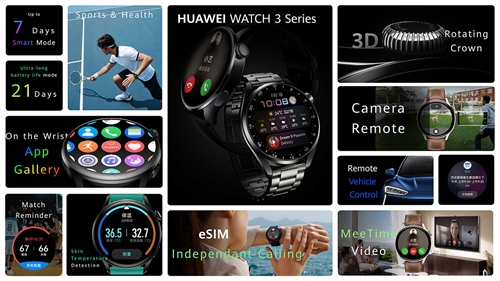 Watch 3 and Watch 3 Pro are rich in various sensors, in addition to the classic accelerometer, gyroscope, barometer and geomagnetic sensor, they also include a heart rate sensor, a blood oxygenation sensor and a thermal sensor for measuring body temperature. The watch can also measure blood sugar levels. There are more than 100 different sports to choose from to monitor physical activity.